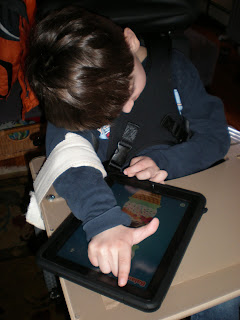 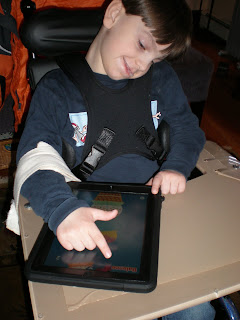 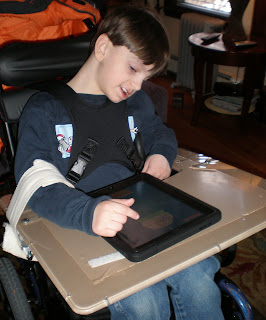 Cj LOVES the iPad, and so does Ryan! At first Ryan would sit for an hour or so and help Cj play, but Cj gets it now and loves to play by himself. He has his apps, Ryan has his. I found a great elbow support I am going to order from Rifton for his right arm, but I am still looking for the right stand for his tray. I also purchased the Otter Defender Case, very durable, a must!
Cj is bowling really well now. It's so great to see him finally interacting, and really enjoying himself on his own! They still play together, but Ryan has become a pro at games I can't even figure out. He wants to learn chess, and yes, he said he is going to be a computer nerd and wants to go to MIT summer camp. My Dad has a friend who sends his grandchild, they both go into MIT just to watch the kids. Ryan (6) asked my father if he could go, at $8000.00, I don't think so.
Instead, I signed him up for soccer and T-ball just to see if some sports will work for him (he is so active), he will also go to a summer camp a few blocks away with some friends for a couple weeks during the day. I told my Dad, if he really wants to go to MIT camp he will need to get a job, and do a little fundraising. He is still too young, thank you!
Here are some of Cj's favorite iPad apps: Yes/No, Action Bowling, Talking Tom, Goodie Words, Peekaboo, Baby Shapes, Tap to Talk, Bubble Free, Doodle Buddy, Fireworks Lite, Kids Piano Lite, Pocket Pond, Fluid, 123 Kids, Word Family, Talking Roby, Magic Piano. Buddy#1, My First Words, Baby Writer, Actions, Motion Book, Sound Touch Lite, Talking Gina, and Colorful Aquarium, just name a few, and most of these apps are FREE!
P.S. Ryan is finally over the stomach virus after 7 days, Cj is still sick, Mom and Dad are alright so far (besides being exhausted), knock on wood! 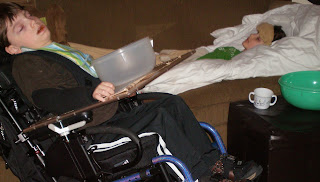 Hello,
This is nurse Lisa, I have been on call now since 1am Friday with Ryan. He has one heck of a tummy virus, one like I have never seen before. Both my kids have been so darn healthy, I am not used to this (knock on wood). Poor Ryan has not had a bite to eat since, only liquids. I have been using so much Clorox and Lysol all around the house I thought Cj would be OK...wrong. I think we are all doomed. I heard oil of oregano can help, so I have hubby going to the local health food store.
I had a dinner party planned for Sunday...I don't think so! Have you tried oil of oregano, and does it work? I hope so!
Posted by Lisa Cj's Mom at 3:18 PM 2 comments: 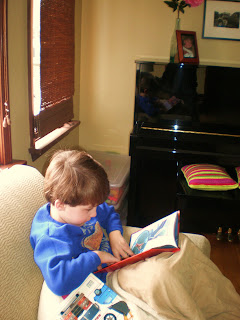 Ryan is in kindergarten and was having some difficulties with some of his reading skills, like most kindergartner's. We worked on them for a while, and all of a sudden, he took off!
I was cleaning around the house when I heard him reading away in the sun room! He had a stack of books and was reading each book, front to back! I was so proud of him, figuring out each word. It took him some time, but he was READING, and so well! Now he wants to read a few books every day when he gets home from school...we will see how long this last.
One proud Mama here!
Posted by Lisa Cj's Mom at 2:53 PM 2 comments: