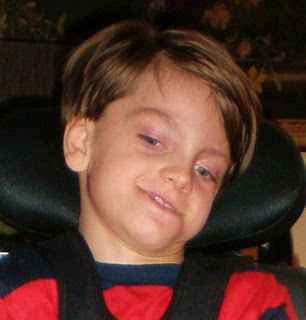 I made the appointment at Children's Augumentative Communication Program. Chris and I had Cj's speech therapist and physical therapist meet us at the hospital. I was so excited about this day, I could not contain myself. I have had many conversations with my son about this day and he was just as excited. I told him, I know you're going to prove to the world someday just how smart you are. Someday you will be able to speak your mind, just you wait! He always giggles and beams when I say "Who knows, maybe you will be the president of the USA someday."

We all walked into the very small evaluation room. There were two specialist's whom took to Cj right away. They spoke with his speech therapist first and she said he had a short trial on the Dynavox and he had some difficulty navigating the screen. She decided to continue using communication boards and books for more practice. I stepped in and told them I have been using many methods of communication since he was 6 months. When I realized he could not speak (he has very few words) I used eye gaze boards that I made when he turned one. I spent every day training him to look at objects, to make choices and to point to objects which he mastered. I did many hours of research and emailed many parents with non-verbal children with many different diagnosis' and asked them which communication device, if any worked for their child. I told the specialist that the Tobii C1 had the best results with children that have similar issues as CJ. Some children with Lesch Nyhan can speak, however many can't.

The specialist then tested Cj's eye gaze using boards, watched him watch a video of Dora and decided to test test him on the Tobii C1. Both therapist's and my husband were a bit nervous, I was not. I had a gut feeling this was it. They brought in the Tobii and hooked him up with the screen in the right position and he picked it right up. They asked him where Dora the explorer was and put her in many different positions over the screen and he nailed it each time. When he looks at the screen a red dot comes up and goes over to his choice and speaks for him, "Dora". Then they had a screen come up with four choices, play with toys, watch a video, do nothing and all done. He picked play with toys and then a drum, bubbles, a ball and a book came up on the screen. He went right to bubbles, he LOVES bubbles! The computer said,"I want to play with bubbles" he beamed and looked at everyone in the room and laughed. There was not a dry eye in the room. I said I told you so! His ST and PT could not believe how well he did, especially with seven people staring at him. Cj had a few more tests and nailed them all, picking all his favorites with ease. They even tried to switch things up, he proved them wrong. We are going to rent the device for a few months through insurance, then if all goes as well as expected insurance will pay for one.

So watch out world! Cj has 8 1/2 of years of telling us what he has thought of, what he thinks about and most of all, what he wants. I hope it is all good..lol! Ryan said the other day, "Mom, I can't wait to talk with Christopher!"
Posted by Lisa Cj's Mom at 9:36 AM

Email ThisBlogThis!Share to TwitterShare to FacebookShare to Pinterest
Labels: Dream